Home ▸ News/Blog ▸ Who’s in control? Research reveals heating is the cause of household rows.

There are few homes in the land that won’t echo to the sound of the most common family fall-out in the coming months – what temperature the heating thermostat should be at!

As we head into the colder months of autumn, it may be that the argument is one that already prevails in your home.

Although there’s no scientific reasoning behind it, the hot vs cold debate does seem to divide the sexes with one partner prefer 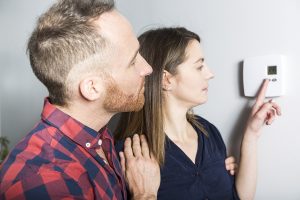 ring a warmer home while the other is happy to don an extra layer and brave a colder house.

Leaving the lights on in empty rooms at home is the biggest cause of rows between couples, according to a survey earlier this year. Closely followed by how high or low the heating should be!

Just turning down your thermostat by one degree is said to make a marked difference in your fuel bill.

If you’re managing to hold off with flicking the heating switch permanently to on, you should still be giving your heating system a quick blast to make sure it’s working well.

The last thing anyone wants to have to shiver in the autumn after realising your heating system developed a fault while it was put into hibernation over the summer.

Early autumn is also a good time to give some thought as to whether your heating system is due an overhaul or replacement.

Our shop has a wide range of replacement parts or you, if you’re in the market for a new oil-fired condensing or non-condensing boilers, check out our Boiler Wizard to see what might be the answer to your heating prayers.

Click the button opposite to subscribe to our news and blogs updates. You’ll be notified each time we release details on products, news and offers.